Mark transformed into Alice, while Anne Hegerty is dressed as the Red Queen. The show's newest Chaser Darragh Ennis is donning a big hat as he takes on the role of the Mad Hatter. Meanwhile, Paul Sinha has changed into The White Mouse while Shaun Wallace completes the look as he becomes The Cheshire Cat.

Read more on The Chaseu-turn The Chase fans swoon over ‘pretty’ player - but quickly turn on her after shock movestarstruck The Chase fans swoon over 'handsome' player and compare him to Hollywood star Mark's weight loss has been so drastic that some fans didn't recognise him. The 57-year-old star has lost a remarkable ten stone in the last few months, with many praising his new look. Meanwhile others have been left speechless by The Chasers' fancy dress, with one saying: "I will look forward to watching this I absolutely love watching the Christmas Chase special.

Which one is you @TheShaunWallace?" "Mark looks so pretty lol. Love the costumes," said another. Most read in News TVFESTIVE PUN The VERY rude jokes hidden in your favourite Christmas filmsXMAS CAROL Carol Vorderman sizzles in skintight dress for This Morning Christmas specialSANTA BABY GMB's Susanna Reid sends fans wild in low cut sparkly dress on Christmas specialxmas ruined Big Brother legend breaks down in tears and accuses Asda of 'ruining' Christmas While a third asked: "Who's the hot blonde?" The Chase has

.
Tags: Susanna Reid Paul Sinha Mark Labbett Anne Hegerty Shaun Wallace show stars love
See showbiz news on thesun.co.uk
The website popstar.one is an aggregator of news from open sources. The source is indicated at the beginning and at the end of the announcement. You can send a complaint on the news if you find it unreliable.
Related news and gossips

STUNNING, sexy, and perfectly chiselled aren't the adjectives producers might have in mind when they are casting hopefuls for The Apprentice. However, once the show wraps and the new reality stars have a taste of the high life, it tends to be how they end up. Jemelin Artigas, who was on the show in 2019, wowed fans of the series this week with her amazing new look.

CHANELLE Hayes has shared a romantic snap of her kissing her fiance. The 35-year-old usually keeps her other half Dan under wraps after meeting in early 2021.

Elvis Presley’s ex-wife Priscilla Presley, 77, updated fans on her daughter Lisa Marie Presley’s condition just moments before her tragic death.The only child of Elvis, who has sadly died aged 54, reportedly suffered a cardiac arrest yesterday.Priscilla posted a photo of herself and her daughter on her Instagram feed beside a brief caption that confirmed the sad news her daughter was fighting for her life yesterday afternoon.Despite asking fans and friends for prayers in her message on social media, however, Lisa Marie’s death was announced soon afterwards. Priscilla had written: "My beloved daughter Lisa Marie was rushed to the hospital."She is now receiving the best care.

LOVE Island bombshell Ellie Spence looks unrecognisable with brunette hair in a throwback snap. She was announced as a latecomer and is hoping fans will vote for her to head into the villa next week. 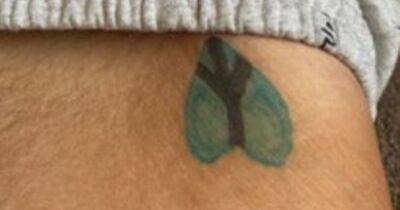 A mum says her tattoo resembled a Disney character after losing a whopping 10 stone. Morgan Woodruff, 33, says she got the tattoo removed after it resembled Frozen's Olaf.

Danniella Westbrook looks unrecognisable in rare throwback with both her kids

DANNIELLA Westbrook looked very different in a picture she shared from when her children were young. The ex EastEnders star appeared bronzed and with darker hair in the photo taken around 15 years ago on trip to Las Vegas. Son Kai, now aged 26, flashes a huge smile and her daughter Jodie, now 21, looks adorable while Danniella stands proudly beside them.

Anne Hegerty, 64, couldn’t help but laugh after seeing the display around Prince Harry’s new memoir in one particular bookshop.The Chase quizzer’s post comes after the Duke of Sussex, 38, caused a huge stir with a series of claims in bombshell publication, Spare.Yesterday, Twitter user Chris Rose shared a photograph of the window display of an indie bookshop based in Swindon called Bert’s Books.“The winner of best window display goes to @bertsbooks,” he penned with a laughing emoji.The picture showed copies of the royal’s new book cheekily interspersed with copies of Bella Mackie’s best seller, How To Kill Your Family.Anne then reacted to the post with a Rolling on the Floor Laughing emoji, with the caption “PMSL”, which means “p***ing myself laughing”. People took to the comments section to share their thoughts on the post, with Delroy writing: “Get off his back please!”While under the original post, Robin penned: “Brilliant.That deserves a prize.”Miss Wimpey added: “I think this is brilliant.

LAURA Tobin has revealed the secrets behind her fresh face – micro needling. The 41-year-old showed fans exactly what she has done as she shared a snap of her very red face after the treatment. Good Morning Britain star Laura vowed to look after her skin this year, but admitted that her lifestyle doesn’t help.

Anne Hegerty, 64, has been on The Chase since 2010, becoming the first woman on the show and making her one of the show's longest-standing Chasers. In an interview with Express.co.uk Anne was asked if she competes with her fellow Chasers and how she feels about her position on the show in a very candid chat.Anne is on The Chase alongside Mark Labbett, Shaun Wallace, Paul Sinha, Jenny Ryan and Darragh Ennis.Express.co.uk asked Anne how she gets along with her co-workers behind the scenes and whether there is any competition involved.She said: "We're all friends.

AN EastEnders favourite looked unrecognisable as they showed off their red raw nose after being struck down by a sickness bug. Actress Lucy Benjamin, 52, who first stepped foot in Walford in 1998 as Lisa Fowler, was last seen in Albert Square in 2020.

BENIDORM star Adam Gillen is well known for playing fresh-faced holidaymaker Liam Conroy - with his ginger locks and clean-shaven face. Now, the actor - who played the hapless character in the ITV hit series - has been spotted looking drastically different to Liam eleven years on, sporting a huge bushy beard.

THE Chase's Mark Labbett has complained that he's being 'punished' by the show's producers. Mark, 57 - AKA 'The Beast' - has been a Chaser on the ITV programme since it hit our screens in 2009. The popular show, hosted by Bradley Walsh, sees contestants go up against one of the Chasers in a bid to win some money.

Tom Brady finally got to celebrate Christmas with his kiddos! 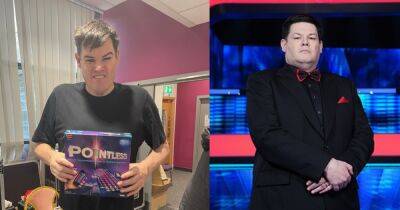 Mark Labbett has had an incredible weight loss transformation in recent years as the star debuted a slimmer-than-ever look for Christmas. 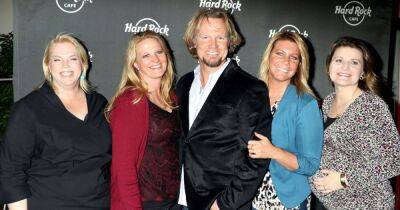 One big, happy family? The Sister Wives cast gave a glimpse of how their plural brood celebrated the holidays amid multiple breakups.

THE Chase will have a bit of a shake-up across the Christmas and Boxing Day specials with a change to the line-up. While all the Chasers will appear across the two days, Paul Sinha has revealed he will be missing from the Boxing Day special tomorrow. On Christmas Day, he was seen dressed up alongside Ann Hegarty, Mark Labbett, Darragh Ennis and Shaun Wallace in Alice In Wonderland themed costumes for a fantasy special. 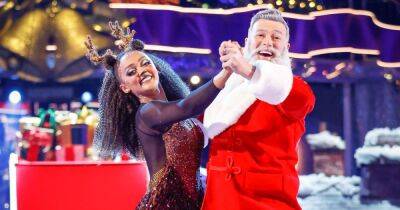 Soap star Alexandra Mardell has been crowned the winner of Strictly Come Dancing’s Christmas special for 2022.

Anne Hegerty, 64, has been on The Chase since 2010, taking on the name of The Governess on the hit ITV show.The Chaser has spoken exclusively to Express.co.uk about her Christmas plans, admitting she calls the festive day her "day off" as she decides to spend it alone at her flat in Swindon.Anne is known for her Governess personality, and this Christmas she will be taking on the role of Fairy Flutterby in a Beauty and the Beast pantomime in Swindon.As she will be off Christmas Day, Express.co.uk asked the Chaser what her plans were this year.She admitted: "Christmas Day is just simply a day off.