STRICTLY star Arlene Phillips has confirmed that she will not be returning to the Dancing on Ice panel for the next series. West End legend Arlene, 79, told The Sun that she had not been approached by ITV bosses to take part in the upcoming season.

The choreographer explained that five permanent judges would be too chaotic and said feedback should be kept short and snappy. Speaking exclusively to The Sun about returning to the skating show, Arlene said: "No not this year, I think having five judges is actually quite a long process and I personally think you need to keep all of the comments snappy - keep those shows moving along.

"Sometimes I find the physical entertainment and watching the artists is really exciting and then I feel like the judges' comments should be two sentences, just two sentences, next thank you. "I don't think they were going to have five judges this year, it was just a one-off last year, in a way a post-pandemic return." READ MORE ON ARLENE PHILLIPS 'INVINCIBLE' I've judged Strictly, but my biggest achievement may surprise you, says ArleneNOT HEAR'SAY Strictly’s Kym Marsh had dance training from ex judge Arlene Phillips Although Arlene won't be popping up on the skating programme, she will be tuning in.

Arlene, who has teamed up with Save the Children Christmas Jumper Day Campaign, continued: "I can't wait to watch Dancing on Ice, I love the show and I love watching people speed along on the ice and just grow in their ability." Last year, Arlene joined existing judges Ashley Banjo, 34, Jayne Torvill, 65, Christopher Dean, 64, and Oti Mabuse, 32. She was given the chop from Strictly in 2008 amid suggestions she was too old at 64.

Tags: Jayne Torvill Ashley Banjo Arlene Phillips show dance stars
See showbiz news on thesun.co.uk
The website popstar.one is an aggregator of news from open sources. The source is indicated at the beginning and at the end of the announcement. You can send a complaint on the news if you find it unreliable.
Related news and gossips

A STRICTLY contestant left her pro partner stunned with her raunchy moves at the boozy wrap party. Ellie Taylor left Johannes speechless with her dirty dancing after sinking four cocktails on the night.

STRICTLY star Tony Adams is set to transform his £3.5m mansion into a TEN bedroom property with a pool. The former England captain, who waltzed off Strictly Come Dancing last month due to an injury sustained while on the show, plans to extend his countryside mansion to create enough bedrooms to nearly host a football team. The 56 year old Arsenal legend is set to convert his stables into a two bedroom annexe complete with king sized beds. 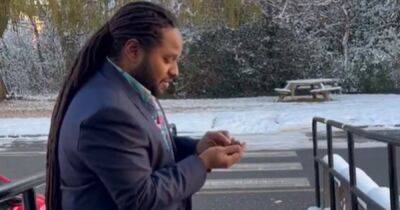 Strictly star Hamza Yassin showed he's not given up the day job yet by coming to the rescue of a bird trapped in a window at the BBC studios in London.

Strictly Come Dancing professional James Jordan, 44, has admitted he thought parts of the Paso Doble danced by Will Mellor, 46, and his partner Nancy Xu, 31, tonight were “so bad”.The former dancer criticised the actor’s “cape work” as he confessed he felt others were more deserving of a place in the Strictly final.Tonight was the Strictly semi-final, as celebrities and their partners took to the dance floor to perform two separate routines with the hope of seriously impressing the judges.Will and Nancy were the last couple seen battling for their place in the final, but not everyone was impressed by their performance. The pair’s first dance was a Paso Doble to ‘Uccen’ by Taalbi Brothers, which prompted some criticism from former Strictly pro James. The star, who often shares his opinions on the BBC show with his 337,800 Twitter followers, shared his thoughts on the routine.“Week 1 - myself and Ola thought he was the bees knees and clearly the best,” James began.“Unfortunately for him - everyone has got better and better and he hasn’t.“I still think he will get to the final but I feel others deserve it more than him.“The cape work was like a dishcloth,” James complained.

Helen Skelton, 39, has been captured on camera clearing the marital home of various wedding gifts, eight months on from their traumatic split.The Strictly Come Dancing star, whose so-called "revenge dance" on the show last weekend went down a storm, had her possessions appraised and sold on TV.Richie Myler, 32, is now loved up with a new partner, whom he paid tribute to on Instagram earlier this week in honour of her recent birthday."Happy birthday bub,” he wrote with a red love heart emoji in view of his 19,700 followers.

STRICTLY Come Dancing star Christopher Parker looks very different after quitting fame to work as a solicitor. The actor - who played Spencer Moon on the BBC One soap from 2002 to 2005 - appeared on the dancing competition in 2008. Christopher - who was partnered with pro dancer Hanna Karttunen on the first series - came second in the competition, losing out to newsreader Natasha Kaplinsky.

STRICTLY Come Dancing star Oti Mabuse rakes in a whopping £2million through two secret side hustles that aren’t mentioned on TV. The 32-year-old dancer has banked an impressive £1.5million from her TV, media and advertising work in the last year.

STRICTLY Come Dancing fans have been busy speculating over the futures of this year's professionals. There's always intense scrutiny of the pro line-up as bosses chop and change to keep the show feeling fresh.

I made a life changing decision when I turned 50 – and thankfully it’s paid off, says Strictly star Claudia Winkleman

CLAUDIA Winkleman’s TV work has been dominated by Strictly Come Dancing for the past six years – but all that’s about to change since she turned 50. The mum of three is hosting another BBC1 contest, The Traitors — a new, big-budget show which starts tonight and is arguably her biggest solo presenting role yet.  And she reckons the challenge has come at just the right time. She said: “I turned 50 and thought I’d start saying yes to things.  “I mean, it’s 50, and we’re only here for two minutes, so I felt like I wanted to work a bit more and be less risk-averse.