THEY'VE been together for eight years but Stacey Solomon and Joe Swash are gearing up for a very different Christmas. This year marks their first as husband and wife after they tied the knot in July.

And Loose Women star Stacey has shared her excitement ahead of the big day at their home Pickle Cottage. She said: "We look forward to the same thing every single year – just stopping.

"We know that on Christmas Eve, Christmas Day and Boxing Day we’ll be home with our kids, and for us that’s the most exciting thing." Stacey, who shares children Rose, one, and Rex, three, with Joe, and is also mum to Zachary, 14, and Leighton, 10, from previous relationships, also revealed she makes the family do the same thing every year. More on Stacey SolomonBABY JOY Stacey Solomon’s ‘secret sister’ gives birth and reveals adorable nameFESTIVE FIRE Stacey Solomon shows off stunning yet simple Christmas fireplace She told the Mirror: "We have breakfast in our pyjamas and then we get dressed, because I like everyone to wear something nice on Christmas Day – much to their dismay! "Although Christmas morning starts at about 4am, it’s Joe who’s the first one up, running downstairs to find his stocking!" Stacey is going all out this year with the decorations at Pickle Cottage.

Just last week Stacey revealed her "dream Christmas tree" that she made for free from her garden - and fans absolutely love it. Most read in Showbizowen no Michael Owen divides opinion for having a ‘favourite child’SECRET BATTLE Wife of Tina Turner's son reveals his cause of death as music world mournsLEGEND LOST Ruth Madoc dies after she tragically vowed 'I'll soon be back' following fallfit-spo Kate Ferdinand reveals the secrets to her toned body - and 'gross' daily

.
Tags: Joe Swash Michael Owen Stacey Solomon Kate Ferdinand Christmas Eve show stars Solomonic
See showbiz news on thesun.co.uk
The website popstar.one is an aggregator of news from open sources. The source is indicated at the beginning and at the end of the announcement. You can send a complaint on the news if you find it unreliable.
Related news and gossips

FRANKIE Essex has revealed Christmas was almost ruined after she locked herself out her house with her twin babies. The 34-year-old was forced to call a locksmith as they all waited in the car and were forced to push back all their festive celebrations. 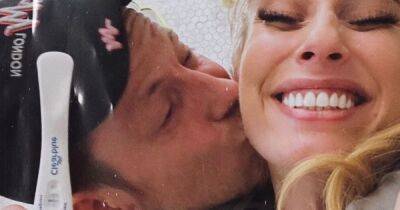 Stacey Solomon, 33, has unveiled her huge baby bump after announcing her exciting pregnancy news on Wednesday.The star shared the stunning photos in view of her 5.4 million Instagram followers this evening. Stacey posed with her husband Joe Swash, 40, for the cute pictures, which saw the Loose Women star cradle her stomach as she stood in a pair of mum jeans and a grey Calvin Klein bra. The pair looked positively thrilled as they gazed down at Stacey’s growing baby bump.Stacey, who announced that she was pregnant with her fifth child earlier this week, admitted via her Instagram story that she was “much further along” than the couple had expected. She captioned the photos: “Coming soon… Much sooner than we thought [laughing emoji]. A post shared by Stacey Solomon (@staceysolomon)“When we found out we still wanted to have that first few months you usually would to adjust and get excited and enjoy it to ourselves, but that didn’t leave us with very long left,” she wrote with another laughing emoji.“So this time next month we will be getting ready to say hello to a whole new pickle.So grateful.“While we had some time off we thought we better take some memories before it’s too late “@chelseawhitephotog who took our wedding pictures took these photos for us.

MOLLIE King has shared a snapshot into her first Christmas with her little girl after the sad death of her father. The Saturdays popstar, 35, who welcomed her first baby with England cricketing ace Stuart Broad, 36, earlier this year, captured her sentimental, snug moments with little Annabella. 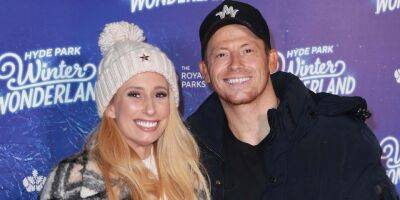 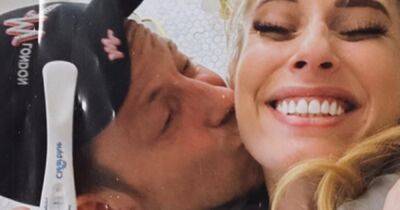 It makes the fast-growing Solomon-Swashes even bigger, with seven members of the family.Stacey captioned the heartwarming clip: "Me + Him = [six children emojis] So grateful &amp; can not believe I’m saying this… Another little pickle is on the way… A HUGE surprise, but one that we are so thankful for to the moon &amp; back bub @realjoeswash."In the video the Loose Women panellist was behind the camera holding up a positive pregnancy test in her hand while in the bathroom of her Pickle Cottage.She could be heard calling her other half Joe before he appeared on camera. With a wide grin, Joe gushed: "You're joking" before he knelt down to embrace his wife.He added: "This is the best news baba."

STACEY Solomon has made a heartbreaking confession about her marriage to Joe Swash, admitting they’re “like ships passing in the night.” The 33-year-old star married Joe in July after they tied the knot at their beautiful home, named Pickle Cottage. Together they have nine-month-old Rose, and Rex, three, and Stacey also has two sons, Leighton and Zachary, from previous relationships.

Stacey Solomon, 33, is head over heels in love with her former EastEnders star husband Joe Swash - but she has confessed that, as the pair lead increasingly busy lifestyles separately, he doesn't always understand her "mentality".Speaking in a recent interview, the Loose Women panellist explained that the pair are very different people - and they sometimes struggle to spend enough time together as a family.Stacey, who tied the knot with her beau in a fairytale ceremony earlier in the year, admitted: "Joe and I can be like ships passing in the night."When I work he looks after the kids, and when he works I have the kids."We’re very different people but when we strip everything back, what it all comes down to is our family," she told Mail Online.She explained that the pair are also fortunate enough to share the same "core moral values".However, that's about as far as it goes for the couple, who are compatible despite their many differences.The Sort Your Life Out star is relentlessly tidy and very well organised, going as far as to fold her underwear into "tiny squares".She has built a brand out of her obsession with neatness, teaching others to be the same in her book Tap To Tidy: Organising, Crafting &amp; Creating Happiness In A Messy World.Yet Joe feels more "comfortable" if he can shape areas of the house which are left "upside down".Stacey finds calmness in being tidy, even sometimes rising at 1am to clean the house if she gets struck down with insomnia.Her habit began as a young child, when she would even organise her food into separate sections on her plate.She also suffered panic attacks in her youth and found that focusing on a simple task such as tidying would "shut off" her mind when she needed to achieve