I'M A CELEB winner Jill Scott didn’t earn as much as Matt Hancock for their jungle stints and joked today "I'm going to complain!" The retired England footballer was crowned Queen of the Jungle in the 2022 series while the MP landed in third place. The Sun today revealed he pocketed a staggering £320,000 despite vowing to donate a proportion of his fee to charity.

I'M A Celebrity's current crop of stars are proving it's not all that easy to look glamorous in the jungle. However, it can be done - just ask Carol Vorderman, who has been reminiscing on her time on the show. The 61-year-old star, who has been covering the show for This Morning, is still referred to as the jungle's "stunner" years later.

Harry Redknapp, 75, spoke about Matt Hancock, 44, and his decision to join ITV’s I’m A Celebrity… Get Me Out Of Here! despite an outcry from the public and some of his fellow MPs.The football manager admitted he felt like the public were keen to watch the former health secretary “suffer” during the jungle trials. Harry competed in I’m A Celeb back in 2018 and went on to be crowned King of the Jungle after proving popular with the public. In a new interview, the star was asked what he thought of Matt joining the show when people felt he should be at home working for his constituents. “Yeah, I think lots of people did think he should be at home,” the star reflected.  “He was always going to get picked for every trial,” Harry admitted. “People wanted to see him suffer. “I suppose lots of politicians have done different reality TV shows like Strictly,” the football legend added. “So he’s not the first, but he’s going to get some grief over it, that’s for sure.”Harry was then quizzed about what it takes to win the show after his victory four years ago.“It’s quite tough.

GOOD Morning Britain's Susanna Reid has been forced to apologise for bad language on Good Morning Britain. After ripping into Matt Hancock for his decision to go on I'm A Celeb, regular guest Andrew Pierce said: "You're a complete whatsit-head...

PETER Andre has revealed he only regrets one of his tattoos – and it’s not his one of ex Katie Price. The 46-year-old previously had her name inked on his wedding finger, but despite having to go through getting it removed,  it is in fact an etching on his arm that he wishes he never had done. Writing in his new! magazine column, dad-of-four Pete revealed:  “I’ve got a tattoo I regret… sort of.

ANT and Dec have teased a first look at the I'm A Celebrity... Get Me Out Of Here! camp with just weeks until they return to Australia. The hair-raising new promo for the ITV show sees the Geordie duo hurtling through the air as they skydive down into the jungle, before unfurling parachutes emblazoned with a special message.

AMY Willterton has ended her engagement with her fiancé Daniel Day. Daniel popped the question to Amy back in 2019 but pals said the pair had since chosen to end their relationship. Amy, 30, and Daniel, 29, share a two-year-old daughter.

ANT and Dec were spotted smiling together at Heathrow Airport ahead of filming the All-Star version of I'm A Celebrity. The presenting duo, who were pictured at the gate, dressed in comfy clothing for their British Airways flight to South Africa. We revealed back in April that show bosses were inviting legendary campmates for a pre-recorded version of the show.

I’m A Celebrity…Get Me Out Of Here! camp after signing up for the ITV reality show - for a second time.The beloved EastEnders actor, who has portrayed the role of Robbie Jackson since 1993, is set to fly out to South Africa in order to take part in an All Stars series.READ NEXT: I’m A Celebrity location confirmed for 2022 by ITV after two years away from AustraliaDean, who starred in I'm A Celeb back in 2006 and ended up coming fifth and garnering a loyal legion of fans, has reportedly agreed a deal with ITV bosses to appear on the All Stars edition of the show, according to The Sun.The paper reports that the soap star, 44, will be flying out to South Africa to record the 'Best Of' series In the "coming weeks".Reports say that the All Stars edition of I'm A Celeb will air next spring, in early 2023.According to the paper, a source has has said that Dean is regarded as "one of the best contestants the show has ever had".Hence why his name popped up when the new I'm A Celebrity series was proposed."It’s taken some time but he’s now signed on the dotted line and will be on the plane to South Africa with some other show greats. 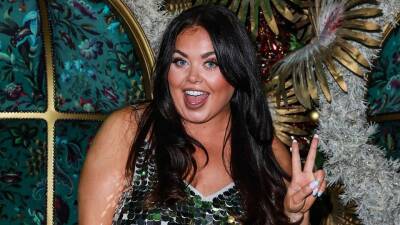 Gogglebox. And her success story is all the more impressive when you hear what a challenging time she had growing up.

I'm A Celebrity...Get Me Out Of Here will reportedly air earlier than normal this year to avoid clashing with the World Cup in November.There are currently talks of the popular ITV series to move from their usual late-November slot, so TV and football fans can enjoy both events.The Qatar 2022 World Cup will kick off on November 21 - the exact date I'm A Celeb premiered last year - and will run until December 18.ITV bosses have reportedly brought the jungle start date forward to avoid clashing with the international football coverage.

I’m A Celebrity… Get Me Out Of Here! power couple Joe Swash and Stacey Solomon are planning to get married this July, but the pair were friends before they eventually started dating. When they first met, Stacey was coupled up with someone else, which left Joe feeling “gutted”.The couple’s story began in 2010, when Stacey won the 10th season of I’m A Celebrity.Stacey had only recently shot to stardom in 2009 after placing third in The X Factor, winning over the hearts of the nation with her silky smooth vocals. Meanwhile, former EastEnders star Joe had won I’m A Celeb back in 2008 and met Stacey on its spin-off show, I'm a Celebrity...Get Me Out of Here! NOW!.The vocalist became a guest on the show the following year, and the pair became good friends. Joe has since admitted that he had harboured a crush on Stacey for years, but it wasn’t the right time for the couple, as the Loose Women star was already in a relationship at the time.He was reportedly left “gutted” when he discovered that Stacey had started dating American celeb Steve O.An inside source had previously claimed to the Mirror at the time: “Joe really fancies Stacey.

I’m the most successful woman to come out of Towie and I’m not done yet, says Gemma Collins

IT'S hard to imagine a time in TV land before Gemma Collins. The GC - as she is affectionately known - first appeared on our screens back in 2011 when she joined The Only Way is Essex. 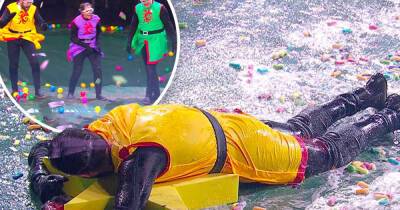 Danny Miller desperately clutches onto his precious stars while battling powerful wind, jet streams and huge balls in the iconic cyclone trial set to air on Saturday night's I'm A Celebrity.  In scenes being shown this evening, the Emmerdale star, 30, is joined by the other remaining campmates David Ginola, Frankie Bridge and Simon Gregson in Wales to take on the epic challenge.

I'm A Celebrity...Get Me Out of Here! camp might not be glamorous, outside the castle walls, contestant Louise Minchin has a stunning home that has wowed fans.The former BBC Breakfast presenter lives in a gorgeous house in Chester with her husband David, their two daughters Mia and Scarlett and two cute Labrador dogs, called Ruby and Waffle.Sharing photos of the home with her 72,000 followers on Instagram before joining I'm A Celeb, fans were wowed by the huge home.One photo shows Louise and one 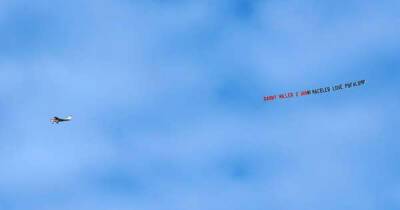 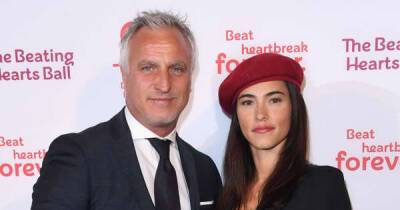 READ MORE: ITV I’m A Celebrity: David Ginola’s stunning girlfriend Maeva who is almost half his age and currently living the high-life in St Tropez “#DavidGinola wet, shirtless and in a cage. There is no way I am currently awake. 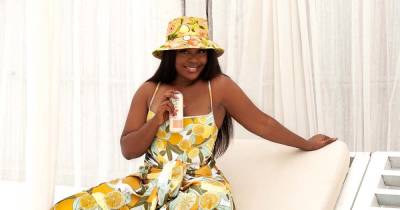 Don’t Think You Can Rock a Bucket Hat? A Celeb-Favorite Designer Tells Us Her Styling Secrets

Bringing it back! Whether it’s Lisa Rinna sporting a linen Gucci number or Kourtney Kardashian decked out in plaid, bucket hats are a staple on the style scene this summer.

I’M A CELEB winner Giovanna Fletcher can add another string to her talented bow – an incredible singing voice.  The mum-of-three stole the show as she and McFly husband Tom, 35, joined forces to perform a song together.  Already a best-selling author, actress, podcaster and blogger, Giovanna, 35, could be making a move into the music business after sharing a video of her singing. 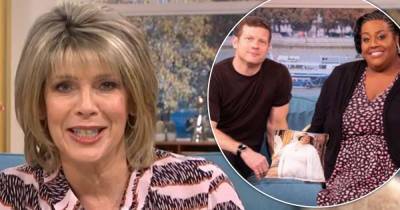 The Sun: 'We’re not on top of each other, do you know what I mean?'Phillip and Holly, they go on holiday together. They genuinely love each other, in a brother and sister way.'But literally when we finish everyone wants to go home to their families and see them. 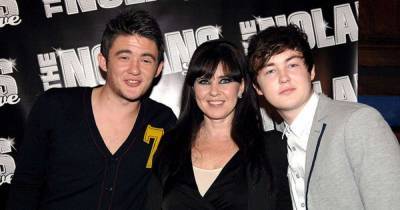 © @Copyright HELLO! Hello! Magazine previously revealed that he has changed his surname to match his mums, . The singer, whose dad Shane Richie is currently starring on  made an appearance on Loose Women back in 2017 to chat about his decision on how to support her while she took part in Celebrity Big Brother. Astronaut Tim Peake ‘spotted UFO in space’ - but it was Russian urineWayne Lineker picks date from line-up of swimwear-clad womenI’M A CELEB FANS CONCERNED AS GIOVANNA FLETCHER STOPS 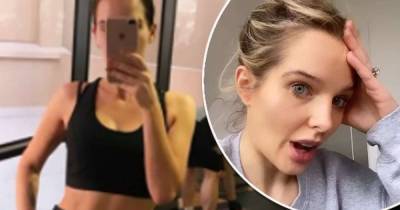 Helen Flanagan says third pregnancy is 'different' from the others 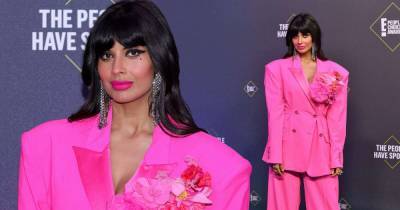 I'm A Celeb is back tonight, with newbie Jordan North already making a splash.

PETER Andre has admitted he’s still terrified of spiders - 16 years on from his traumatic I’m A Celebrity head horror challenge. The 47-year-old has never been able to get over his fear and still runs a mile whenever he comes up against one. 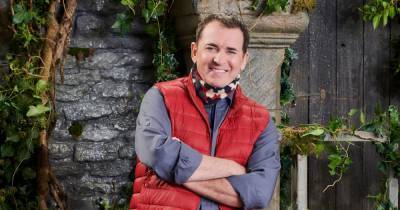 Shane Richie and Coleen Nolan’s son Shane Jr. plans to change his name to support his dad in the I’m A Celebrity jungle, according to reports.

I'M A CELEB winners Scarlett Moffatt and Jacqueline Jossa are joining forces for a special edition of Supermarket Sweep. The pair will take on the likes of their jungle co-star Roman Kemp and his EastEnders star dad Martin in a new series. 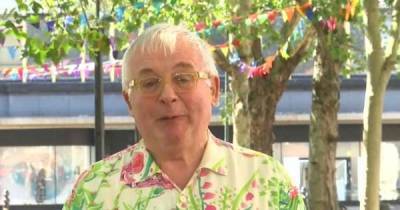 I'm A Celeb would move to the UK and the winner would instead be crowned King or Queen of the Castle. Hosts Ant McPartlin and Declan Donnelly will be returning to host the 2020 series.Christopher, who won I'm A Celeb back in 2007, spoke to ITV News today about how he felt the change in location would affect the show."I think it will change the show considerably.

Made In Chelsea star George Toffolo has told her her heartbreak after discovering her Grandma has coronavirus.

Emily Atack says she is proud of the sexy photographs that a quite Google image search can provide after posing for the cameras in racy underwear.

Dancing On Ice star Joe Swash and his girlfriend Stacey Solomon are the ultimate in couple goals.

Dancing On Ice star Joe Swash and his girlfriend Stacey Solomon are the ultimate in couple goals.

Make-up free Jacqueline Jossa ditched her pristine image on arrival back home in the UK.

What about having some fun reading the latest showbiz news & updates on A.Celeb? Those who enter popstar.one once will stay with us forever! Stop wasting time looking for something else, because here you will get the latest news on A.Celeb, scandals, engagements and divorces! Do not miss the opportunity to check out our breaking stories on Hollywood's hottest star A.Celeb!