OLIVIA Attwood was once again forced to deny she is pregnant following her shock exit from the jungle. The 31-year-old, who is engaged to footballer Bradley Dack, hit back during a Q & A and begged her followers to stop asking all the time. Love Island star Olivia wrote: “Like 300000 of these… nope.

No pregnancies. (Let's stop asking women this all the time too).” Addressing her exit, she insisted she “wanted to leave the subject behind”, adding: “I know it doesn’t make sense to a lot of you, but it also doesn’t make a lot of sense to me if that makes you feel better.” Olivia previously admitted she questioned whether she was pregnant herself when she learned some blood tests results had come back as abnormal. She got the news about the results while she was in the jungle and was rushed to A&E for further tests.

Read More on I'm A Celebrity BYE, OH BOY! Boy George greeted by classic hit Karma Chameleon in hotel after leaving IACJUNGLE FAVE I'm A Celeb's Jill Scott cements place as favourite to WIN amid camp dumping Her test showed she was dangerously anaemic, as well as having low sodium and potassium levels. She recalled: “I was so scared, I was like 'what the hell is wrong with me?'. “They couldn't give me an answer, they just told me that they had to get me to the hospital immediately.

“The results were really, really low when they put them into their reader and they consulted with another doctor off site. I had those bloods done in England before I left, and they were fine. I was confused and of course very, very worried.

Tags: Olivia Attwood Bradley Dack Jill Scott Pregnancy gossips testing
See showbiz news on thesun.co.uk
The website popstar.one is an aggregator of news from open sources. The source is indicated at the beginning and at the end of the announcement. You can send a complaint on the news if you find it unreliable.
Related news and gossips

OLIVIA Attwood has worried fans after taking to her Instagram stories to reveal she's "struggling". The I'm A Celebrity star - who was forced to leave the jungle just days into this year's competition - posted a melancholy selfie today. Olivia, 31, posed in the mirror as she struck a pout for the camera, wrapping up warm in a black puffer coat and leggings.

OLIVIA Attwood’s fiancé Bradley Dack has broken his silence after she was verbally attacked by two strangers. Olivia, 31, said a dog owner turned on her calling her a "b**ch off the telly" and a "psycho" in a vile rant. Olivia, who had to quit I'm A Celeb this year, spoke to her Instagram followers through floods of tears in her car, as she explained she's had a showdown while walking her dog when a woman and then a man turned on her.

Love Island star explained she'd been targeted while out walking her dog, and that she'd been branded a "f****ng crazy b***h off the telly".The reality TV star, who has also appeared on I'm A Celebrity... Get Me Out Of Here! lamented that her "awful experience" during the solo walk was the "sad reality of a woman being on her own".It began when her Carpathian/German Shepherd mix dog Lola leapt over to another woman's cockapoo, her tail wagging excitedly.Yet while the two dogs quickly made friends, Olivia says the fuming owner came over and launched into a tirade of abuse."She turns around to me and is like: 'You're a f****ng crazy b***h.

I'M A Celeb and Love Island star Olivia Attwood had been left sobbing after being verbally attacked by two strangers. The 31-year-old star said a dog owner turned on her calling her a "b**ch off the telly" and a "psycho" in a vile rant. Olivia, who had to quit I'm A Celeb early this year, spoke to her Instagram followers through floods of tears in her car.

OLIVIA Attwood revealed the chaos at her home after an accident almost saw her losing her front teeth. The I'm A Celebrity star, 31, shared a snap of her kitchen and utility room after a mounted unit fell off the wall, narrowly missing the Love Island favourite. "Only nearly got my front teeth knocked out by this whole unit falling off the wall," Olivia captioned the picture.

OLIVIA Attwood has shared cryptic quotes about weathering a storm after her shock exit from I'm A Celebrity. The Love Island star was forced to quit the show after just one day following a worrying dash to hospital.

A STREAM of stars looked ready for bed after a boozy ITV Palooza. Celebs poured out of London's Royal Festival Hall in the early hours and some looked worse for wear. This Morning star Dermot O'Leary appeared very sleepy in the back of a cab while clutching a handful of goodies from the glitzy bash.

OLIVIA Attwood took a swipe at I’m A Celebrity bosses on her social media as she said she was on to “bigger and better things” after her jungle departure. The 31-year-old spent just 24 hours in the jungle before being rushed to A&amp;E after abnormal blood test results. Despite getting the all-clear, Olivia's health sparked overnight crisis talks before it was ruled unsafe for her to return.

I'M A Celebrity... Get Me Out Of Here star Olivia Attwood has reunited with her fiancé Bradley Dack after being forced to leave the jungle. The former Love Island contestant - who rose to fame in 2017 - had to fly home to the UK after a medical drama saw her rushed to A&amp;E.

ANT and Dec revealed that Olivia Attwood could return to I'm A Celebrity next year after she was forced to pull out of the show. The former Love Island star had to leave the jungle after just 24 hours when doctors discovered she was dangerously anaemic.

OLIVIA Attwood has hinted at a "cover-up" over her shock exit from I'm A Celebrity. The 31-year-old spent just 24 hours in the jungle before being rushed to A&amp;E after abnormal blood test results. Despite getting the all-clear, Olivia's health sparked overnight crisis talks before it was ruled unsafe for her to return.

OLIVIA Attwood has admitted she thought she was pregnant before slamming 'misogynistic' rumours surrounding her I'm A Celebrity exit. The Love Island star, 31, has revealed she questioned whether she was expecting when she learned some blood tests results had come back as abnormal. Olivia got the news about the results while she was in the jungle and was rushed to A&amp;E for further tests.

I’M A Celebrity’s Olivia Attwood was forced to quit after abnormal blood test results led to a ­dramatic A&amp;E dash. The check-up showed that the Love Island star was ­dangerously anaemic. A source told The Sun: “It was touch and go for a while.” Olivia said last night: “I was absolutely devastated.” Gutted I’m A Celeb dropout Olivia Attwood last night told how her blood test emergency left her scared and in tears.

OLIVIA Attwood has broken her silence again after her shock I'm A Celebrity exit and said she'll be "back soon". Gutted Olivia, 31, was forced to drop out of I'm A Celebrity on day one - but has already claimed it wasn't because she broke the show's strict Covid bubble. 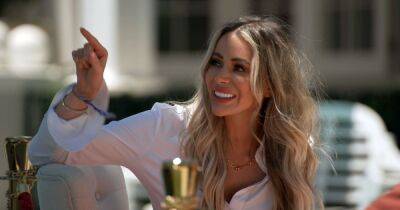 Olivia Attwood's family have given 'clarity' on the real reason the Love Island star was forced to leave the I'm A Celebrity... Get Me Out of Here! jungle after just 24 hours.

I’M A Celebrity’s strict Covid rules forced Olivia Attwood to sensationally drop out. The model and TV host, 31, wanted to return to camp after leaving to deal with a medical issue.

I’m A Celebrity… Get Me Out Of Here! star Olivia Attwood was apparently not forced to leave the ITV show for Covid reasons, despite previous reports claiming otherwise.The celeb shocked viewers when she left the Australian-based series within the first 24 hours of arriving. The Love Island star entered the jungle last Sunday alongside the likes of Boy George, and radio DJ Chris Moyles, and quickly made an impact on fans.During her brief time on the show, Olivia was tipped as a possible Queen of the jungle, but fans were soon left disappointed after ITV confirmed she had to exit the show on medical grounds.On Monday night, host Declan Donnelly said: "Unfortunately, Olivia Attwood has left the jungle for medical reasons and sadly won't be returning."Ant McPartlin added: "Now, she does feature in tonight's show, which was filmed before she had to leave.

BOSSES of I'm A Celebrity... Get Me Out Of Here have been in "talks" over the future of the jungle camp after Olivia Attwood was forced to leave.  The Love Island star - who was the first ever signing from the ITV2 dating show - had to walk away from the new series on medical grounds on Monday.  Now, I'm A Celeb show runners are in a frenzy as fans have been calling for a big female signing to "fill the gap" left by Olivia, 31.  Insiders have revealed that bosses feel that the camp could be "lacklustre" after the Love Island favourite, who rose to fame in 2017, left the Australian jungle.  A source close to Olivia’s family said: "Staff have been in floods of tears in Oz as they were so desperate to keep her and are devastated she’s gone.  "They know she was the shining star of camp and it’s uncomfortable that fans are calling for her return.

MATT Hancock and Seann Walsh are set to enter the I’m A Celebrity jungle today, ahead of schedule.  The former health secretary, 44, will enter the Snake Rock camp alongside comedian Seann Walsh, 36, after the hit ITV series was thrown into chaos when Olivia Attwood, 31, left yesterday. The medical team ruled it was "not safe" for Olivia to return to camp and she was forced to withdraw on medical grounds.