Inside Blake Shelton and Gwen Stefani’s Holiday Plans: They ‘Are Counting Down for Christmas Vacation’

They’re heading home. Blake Shelton and Gwen Stefani will celebrate the holidays together at the country singer’s ultra-private 1,300-acre property in Oklahoma.

“[They] are counting down for Christmas vacation and are pulling all three kids out of school early to get out of L.A. and back to Blake’s ranch,” a source exclusively reveals in the new issue of Us Weekly.

Stefani, 53, shares sons Kingston, 16, Zuma, 14, and Apollo, 8, with ex-husband Gavin Rossdale, from whom she split in 2015. Us broke the news in January 2021 that the former couple’s marriage was officially annulled by the Catholic Church, five years after their divorce was finalized. While the Bush frontman, 57, and the “Don’t Speak” songstress have been coparenting for years, it still isn’t always easy.

“Gwen and Gavin still have issues sometimes coparenting,” the insider adds. “They argue over where the kids will be sometimes, but still have respect for each other.”

Rossdale also respects Stefani’s marriage to Shelton, 46. After six years together, she said “I do” to the “Sangria” singer in July 2021 at the ranch where they’ll spend the holidays with the boys.

In November, Shelton, who just announced he will be leaving The Voice after the upcoming 23rd season, revealed some of his and his wife’s favorite holiday traditions.

“Gwen and I, our tradition has become cooking during Christmas — and not just like your normal, typical [dishes],” the country singer explained in Us Weekly‘s exclusive clip from NBC’s Christmas in Rockefeller Center special. “But we always challenge ourselves and try to come up with a different, weird, complicated, difficult thing to cook every year. It started one year [when] she wanted to do a beef Wellington — which is not easy, by the

Tags: Gwen Stefani Blake Shelton Gavin Rossdale Inside exclusive country city Kingston Oklahoma
See showbiz news on usmagazine.com
The website popstar.one is an aggregator of news from open sources. The source is indicated at the beginning and at the end of the announcement. You can send a complaint on the news if you find it unreliable.
Related news and gossips

Kyle Richards stepped up to defend the singer Gwen Stefani on social media on Wednesday.The 54-year-old Real Housewives Of Beverly Hills star seemed sympathetic to the Voice coach's plight following a controversial new interview in which she claimed to be Japanese, despite being Italian–American and Irish–American in reality.'Everyone can’t wait to be offended by something,' Richards commented in response to a social media post regarding the controversy.Stefani stirred up controversy in an interview with Allure that was published on Tuesday in which she talked about falling in love with Japanese culture after visiting Tokyo for the first time. Adding her opinion: Kyle Richards, 54, stepped into Gwen Stefani's controversy over her comments about being 'Japanese' by suggesting people were looking to be offended in a comment on Wednesday; seen in December in Santa MonicaPrior to that, her father — who is Italian–American — had traveled to Japan for business multiple times and entranced her with his tales of the culture shock.'I said, "My God, I'm Japanese and I didn't know it,"' Stefani recalled raving following her first Tokyo trip.

Gwen added she was a "super fan" of Japanese culture, adding: "(It) should be okay to be inspired by other cultures because if we're not allowed then that's dividing people, right?"Social media users have been criticising Gwen, saying she has been "getting away with this nonsense for far too long" and how it was "disappointing" she had chosen to "double-down" on her stance.But others supported the singer, claiming the criticism is "going to stop musicians from exploring different inspirations from other cultures".Gwen who is married to country star Blake Shelton, was previously criticised for how she used Japanese culture around the promotion of her 2004 debut solo album, Love. Angel.

Britt Lower brought the red carpet glamour in a strapless black gown with a dramatic pink hoop as she posed ahead of the Golden Globe Awards on Tuesday afternoon.While rocking a pair of elegant black opera gloves and floor-length dress from Bach Mai, the 37-year-old actress oozed confidence as she arrived to The Beverly Hilton in Los Angeles, California.The star, best known for Helly R. in Apple TV+ series' hit series Severance, which is up for three awards, completed her chic look with a pair of earrings from REZA.

MOLLY-MAE has revealed she is experiencing a 'confusing' symptom of pregnancy as she prepares to give birth to her first child in a matter of weeks. The former Love Islander made the admission in a post on her Instagram stories.

Gwen Stefani has defended her Harajuku era yet again, despite previously sparking accusations of cultural appropriation of Asian culture for her personal gain.While speaking about her now-controversial Harajuku Lovers fragrance line, which launched in 2008, and frequent use of Japan's subculture over the years, the singer, 53, raised eyebrows as she repeatedly insisted she Japanese.Despite having no ethnic ties to the country as the daughter of an Italian-American father and Irish-American mother, the performer claimed to identify as part Asian.

GEMMA Collins paid tribute to her stepson Tristan and said they shared a special moment on holiday in Bethlehem. The TV star visited Jerusalem with her fiance Rami and his young son and called it a "breathtaking and unreal" experience. 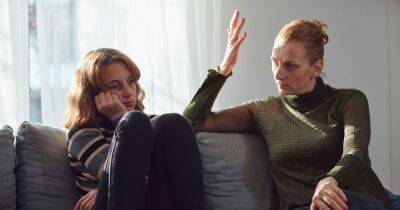 A mum says she is counting down the days until her 'rude' teenage daughter moves out. The parent revealed that her child regularly criticises her meals and appearance, reports Hull Live.

FORMER Coronation Street star Brooke Vincent put the miserable UK weather far behind her as she gave fans an insight into her family Spanish holiday. Brooke, 30, who played Sophie Webster on the ITV soap for 15 years, decided to treat her two boys, Mexx, three and Monroe, two, to a sun soaked trip to Tenerife.

Kourtney Kardashian shared a flashback photo on Monday where she was modeling magenta hair and a sheer black bra as she stood in front of her Christmas tree.The post went with the 43-year-old bombshell's look back at her 2022 Christmas festivities. 'Bye-bye Christmas,' the wife of Blink 182 drummer Travis Barker wrote in her caption on social media.

HOLLY Willoughby got into the festive spirit with a sparkling display in preparation for the New Year. The presenter is currently taking a break from presenting This Morning and on Thursday let her hair down in a dazzling ensemble.

LOVE Island fans did a double take after Luca Bish posted a new picture from his holiday. Many thought that the fishmonger, 23, and ex-girlfriend Gemma Owen, 19, had got back together - following their split last month.

GEMMA Collins has revealed her secret wedding plans ahead of tying the knot with her fiance Rami Hawash. The former The Only Way Is Essex star has revealed she wants to keep things "low key" for the big day. Gemma, 41, and Rami, 49, got engaged last year for the second time, eight years after their first engagement in 2013.

Gwen Stefani, 53, shares rare picture with her sister Jill to wish her a happy birthday

“Only 25 more sleeps until Prince Harry Hypocrite’s book comes out, dumping 416 pages of more sh*t all over his family. Exciting!” he groaned in his latest post on the matter to 8.3 million followers. Yet @samjfch argued: "You are aware of their numerous charities and charitable work that, you know, contributes to society?" @cars4salesussex agreed, telling Piers: "You’re in the wrong on this, he is so within his rights to do his tv show and issue this book."@DidieSimon added sympathetically: "At least he spoke openly about this, admitted his mistakes, went thru learning and understanding why that was wrong.

Blake Shelton revealed that his wife and fellow judge, Gwen Stefani, broke down in tears during the finale of season 22 of The Voice on Tuesday.Shelton was a coach on The Voice for all 22 seasons and announced that next season will be his last. In an exclusive interview with Entertainment Tonight, Shelton shared the heartwarming reason why his wife was sobbing.  The end of an era: Gwen Stefani broke down in tears on The Voice finale, according to her husband Blake Shelton; seen during a previous episode that aired on October 11 About to cry: Gwen is seen here in ruby red near Blake on Tuesday before getting emotional'I walked over to Gwen's chair after the cameras went off and she's over there literally sobbing,' he told ET. 'She was like, "This is our last time that we're going to do this together."'The finale marked the final time the couple would be on the show together as judges since Stefani would not be a judge on Shelton's last season.