I'M A Celebrity... Get Me Out Of Here star Chris Moyles will be left yelping in tonight's terrifying trial as he is covered in creepy-crawlies. A preview clip ahead of the new episode shows the former Radio One DJ writhing around as bugs crawl up his legs and into his shorts.

Tonight, Chris, 48, will be joined by his campmates Boy George and Babatúndé Aleshe for the terrifying Angel of Agony trial. The trio will be locked inside an Angel of the North inspired structure, while they battle it out to win stars to take back to camp. The celebrities will have to move stars from the bottom to the top compartment as they are doused in bugs and surrounded by reptiles.

A first-look clip at the horrifying trial sees the radio host yelping out as cockroaches cover his legs and climb into his shorts. READ MORE ON I'M A CELEBreverse psychology I'm A Celeb fans work out clever trick Matt Hancock used to avoid trialsNO JOKE I was I'm A Celeb's most trolled contestant & blame Ant & Dec for mean gag "Oh, why did I wear shorts," he can be heard saying, before shouting as bugs are poured out from above over his head and shoulders. Elsewhere, Boy George, 61, is seen meditating and humming as he removes the stars from boxes of scorpions and snakes.

"Scorpions are my friends," he can be heard telling himself, before handing stars to Babatúndé, 34, in the compartment above him. It doesn't look to be a smooth start for the celebs, as Babatúndé drops the first star back down to Boy George as he trembles. Most read in TVBBC STAR DEAD Ex-Top Gear presenter Sue Baker dies at 75 after motor neurone disease battleSEALED WITH A HISS I’m A Celeb stars in danger after deadly venomous snakes enter campwar of words Huge Loose Women feud erupts as Denise

.
Tags: Matt Hancock Chris Moyles cover stars Celebrity
See showbiz news on thesun.co.uk
The website popstar.one is an aggregator of news from open sources. The source is indicated at the beginning and at the end of the announcement. You can send a complaint on the news if you find it unreliable.
Related news and gossips 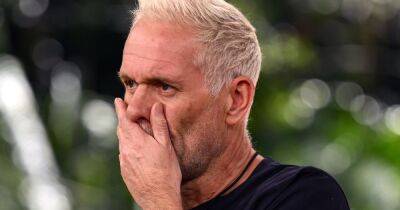 I'm a Celebrity kicked off another campmate on Thursday night as fans chose to give Chris Moyles the boot. 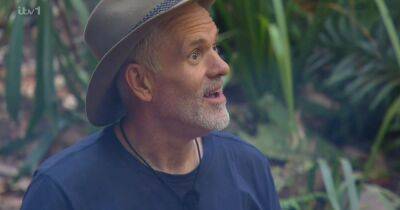 With the I’m A Celebrity… Get Me Out Of Here! final just days away, viewers of the hit ITV show have voted to send another campmate home.

The I'm A Celebrity campmates will face going hungry tonight as Owen Warner and Chris Moyles take on the latest trial. The two celebrities have been seen tackling the Savage Sorting Office trial in a first look clip and tonight's jam-packed show. Owen, 23, and Chris, 48, headed to the Bushtucker Trial clearing after being voted in by the public in last night's episode.

I'M A Celeb fans all said the same thing after Boy George made a HUGE blunder during tonight's episode. This evening's instalment of the ITV show saw the celebrities take part in the Partners In Grime Trial.

CHRIS MOYLES’ girlfriend Tiffany Austin has opened up on the radio icon's 'quieter' side after landing in Australia to support him on I’m A Celebrity…Get Me Out of Here!  The talent manager, who started dating Chris, 48, in 2015, revealed how there is the “radio Chris” and the one that she knows and loves.  Tiffany is the first of the group's family and friends to arrive in Australia and is staying at the five-star JW Marriott hotel on the Gold Coast ahead of the final.  Speaking to The Sun about seeing Chris in the jungle, she said: “I definitely think Chris is being himself.  “There is a Chris people know and the one I know that you are seeing now. The one at home is much quieter.”  Meanwhile Tiffany, who is also the day-to-day manager of Boy George, 61, revealed how the public are seeing the authentic Culture Club singer in the camp.  READ MORE ON I'M A CELEBFAN BACKLASH I'm A Celeb rocked by nearly 2,000 Ofcom complaints over Matt HancockHITTING BACK I'm A Celeb's Chris Moyles snaps at Ant &amp; Dec with very sassy reply in trial Asked if viewers are seeing the “real” Boy George and Chris, she added: “Very much so.

I'M A Celebrity... Get Me Out Of Here hosts Ant and Dec have accused Boy George of being behind the missing towels in camp. The TV presenters headed to their Instagram page to speculate on which of the celebs had been causing trouble in camp.

I'm a Celeb, but does think the "airtime" will do him good.Tiffany has admitted that she misses Chris "making me laugh everyday" but seeing him in the jungle has made it easier.She landed in Brisbane airport to support Chris and George in camp and said she was pleased with what she had seen so far.However, she did express concern over the trials, with Chris having taken part in two in a row.She said: "Absolutely it is part of the experience of doing the show, but I am worried about him obviously but it is part of being on the show he has to experience that."It is wonderful he can get some airtime as well."Tiffany also shared her happiness that Chris has fellow friend Boy George in there with him, taking some of the "worry" off her back.She continued: "I would like both of them to win, I love them both and I am just so excited. It is lovely they have each other in there, for me anyway."There is radio Chris and then there is the Chris that I see every day which you are seeing"This is what he does every day for a living - he makes me laugh every day.""I definitely think Chris is being himself.There is a Chris people know and the one I know that you are seeing now.The one at home is much quieter."I miss him making me laugh.

I'M A Celebrity... Get Me Out Of Here have been left baffled after spotting 'vegan' Boy George scoffing jelly babies. Eagle-eyed viewers took to social media in confusion after George, 61, tucked into a handful of the sweets after the Deals On Wheels task.

TENSIONS are bubbling in I’m A Celeb after Boy George, Chris Moyles and Babatundé Aléshé left campmates starving with a Bushtucker Trial flop. They faced a challenge after a public vote — which finally spared MP Matt Hancock. But the trio limped back to camp with just three stars, meaning the 11 celebs had to share just three meals.

I’M A Celebrity has become embroiled in a ‘fix row’ after fans claimed Babatunde Aleshe was deliberately ruled out of the next trial. Ant and Dec revealed Chris Moyles had been picked by the public to take part in Boiling Point, as Matt Hancock was once again spared. But fans had been hoping to vote for Babatunde again after he spectacularly failed the last trial.

I'M A Celebrity's Boy George turns to Buddhist chanting to get through a terrifying Bushtucker Trial in tonight's show. The Culture Club singer, 61, radio DJ Chris Moyles and comedian Babatunde Aleshe are tasked with winning meals for camp after MP Matt Hancock avoided being chosen for a seventh consecutive trial. While controversial Matt powered through his challenges with a stoic determination, tonight's trio seem far less adept at keeping calm during the Angel of Agony trial. 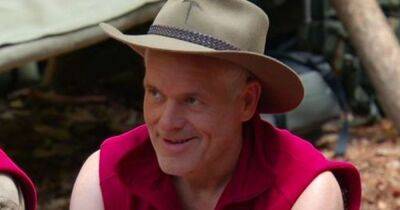 I'm A Celebrity... Get Me Out Of Here's Chris Moyles has 'deeply held issues he’s yet to disclose' with Matt Hancock, according to a body language expert.

I'M A Celeb fans have spotted a clue that Chris Moyles thinks Matt Hancock LIED about his trial - did you spot it? During Thursday evening's instalment of the ITV show, the former Health Secretary was voted by the public to take on his second trial, Tentacles of Terror. It saw him submerged in water in a giant octopus-shaped cage — which hosts Ant and Dec said would be home to various critters.