I’m A Celeb rocked by over 3,000 Ofcom complaints as viewers rage over controversial campmate

I’M A Celebrity has been hit with thousands of complaints surrounding the show’s most controversial campmate ever – Matt Hancock. Broadcasting regulator Ofcom has so far received 3, 287 complaints relating to his inclusion in the jungle AND the treatment of the former health secretary.

Matt’s arrival in the jungle sparked outrage with his fellow campmates, as well as amongst politicians and the general public. With four days to go until the final, viewers still haven’t warmed to him being there and 1,764 unhappy fans have felt strongly enough to write to the regulator.

He has however gained a legion of fans, and the majority of the other complaints relate to fans thinking Matt is being bullied in the jungle. In a statement about the figures, Ofcom said: "It’s worth being aware that under our rules - and taking into account freedom of expression - there's no ban on any particular person taking part in programmes.

Read More on I'm A Celebrity ANT'S RANT Fuming Ant McPartlin rages at I'm A Celebrity fans after latest episode ends'TOO EASY' I'm A Celebrity viewers all have the same complaint about latest trial "However, if the mere presence of a person is likely to cause offence, we would expect broadcasters to take steps to mitigate or justify that offence. How they do that editorially, is up to them." The latest wave of complaints come after some people demanded that show bosses step in as they felt 'uncomfortable' watching Matt interact with the celebs.

As well as being mocked by those in the jungle with him, the MP for West Suffolk was selected for the unpleasant Bushtucker Trials six consecutive times. Most read in I’m A CelebrityJUNGLE TROUBLE Fuming IAC fans brand show a 'fix' as favourite is dumped from the

.
Tags: Matt Hancock show Rock Celebrity
See showbiz news on thesun.co.uk
The website popstar.one is an aggregator of news from open sources. The source is indicated at the beginning and at the end of the announcement. You can send a complaint on the news if you find it unreliable.
Related news and gossips

I'M A Celeb fans spotted a 'major moment' missing from last night's Coming Out reunion show. Several viewers spotted that Matt Hancock wasn't shown chatting and hugging his co-stars as he returned to the hotel after coming third.

I'M A Celeb was rocked by a series of threats that viewers were never shown, Boy George has revealed. The star explained that he told ITV bosses he was leaving the show "a few times" when he didn't get what he wanted.

SOME I'm A Celeb fans are unhappy about the campmates who made the final two - and they haven't been shy in complaining. A few gloomy viewers couldn't bring themselves to congratulate winner Jill Scott or runner up Owen Warner after 12 million people voted.

RUTHIE Henshall has "not switched on I'm A Celebrity once" after bosses signed up disgraced MP Matt Hancock. The actress said she "cannot and will not support his transformation to acceptable TV celebrity" and urged fans "don’t mistake him for a panto villain or a cheeky chap." The I'm A Celeb 2020 star said she had been inundated with requests to comment on the former Health Secretary entering the ITV jungle after her mum Gloria died following months of isolation in a care home.

I'M A Celebrity viewers gagged as Mike Tindall swallowed blended pig's penis during tonight's gruesome Bushtucker Trial. The rugby ace, 44, decided to take the plunge and put himself forward for the challenge.

I'M A Celeb's Matt Hancock has been banned from Jonathan Ross' talk show after the ITV star branded him 'horrible'. The former Health Secretary is one of 11 famous faces taking part in this year's series of the programme. Jonathan's programme The Jonathan Ross Show has been on our screens since 2011. 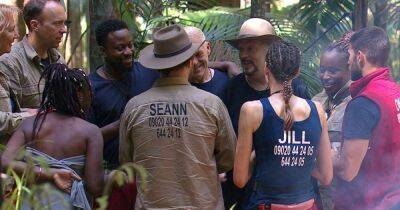 ITV's I'm A Celebrity hit with thousands of Ofcom complaints

I'm A Celebrity... Get Me Out Of Here! has been hit with thousands of Ofcom complaints from viewers watching at home, just over a week after it launched.

MATT Hancock has insisted that Liz Truss’s political career is over. The former health secretary, 44, said the former PM was ‘unlucky’ as he was quizzed by the campmates about the recent political change over.

Harry Redknapp, 75, spoke about Matt Hancock, 44, and his decision to join ITV’s I’m A Celebrity… Get Me Out Of Here! despite an outcry from the public and some of his fellow MPs.The football manager admitted he felt like the public were keen to watch the former health secretary “suffer” during the jungle trials. Harry competed in I’m A Celeb back in 2018 and went on to be crowned King of the Jungle after proving popular with the public. In a new interview, the star was asked what he thought of Matt joining the show when people felt he should be at home working for his constituents. “Yeah, I think lots of people did think he should be at home,” the star reflected.  “He was always going to get picked for every trial,” Harry admitted. “People wanted to see him suffer. “I suppose lots of politicians have done different reality TV shows like Strictly,” the football legend added. “So he’s not the first, but he’s going to get some grief over it, that’s for sure.”Harry was then quizzed about what it takes to win the show after his victory four years ago.“It’s quite tough.

SHE was one of I'm A Celebrity's most controversial campmates and was voted to do a record number of bushtucker trials. But now Gillian McKeith has confessed she went as far as trying to fake being pregnant to get out of one trial on the ITV show.

I'M A Celebrity viewers have flocked to social media to brand the show's voting results as a 'fix'. The show's viewers were left reeling after shared confusion over recent votes which appeared to contradict each other. It comes after disgraced MP Matt Hancock has been voted for every trial since his arrival, despite also being voted as camp leader.

VIEWERS have threatened to switch off I'm A Celebrity... and complain to Ofcom after controversial scenes with Matt Hancock. Many fans of the ITV hit were fuming over footage which aired on Friday November 11 where the former Health Secretary apologised for the mistakes that he made during the pandemic.